Testing the waters. Is there space for homegrown indie YA authors at the one and only UK YA book con?

So this morning I have been brave. I've been optimistic, I've ignored my own perceived fears of being found out a fraud, a charlatan, a quack, and to be honest I'm a little nervous.

Being an indie author in England is a complex thing. After all, we are the home of Shakespeare and Austen and other megaliths of literature. Even our children's books are 'serious' reflections of the wider social and institutional attitude to education, moral fibre and aspiring intellectualism.

Until last year we, England didn't even have a YA book convention - yes, you read that right; in fact I'm not sure there were any book conventions of any kind except for a few brave souls in the crime writing community (who had spent years, neigh, centuries, seeking acknowledgement that their genre was actually of value - BTW it's one of my favourite genres and the one I probably read the most) and the Romance community who made a strike in this direction with the Second City Signing event that started last year in Birmingham.

Don't get me wrong, there are 'Literary Festivals', these are events where a lot of Pimms is consumed, the book reviewers of the broadsheets get to have a nice champagne and smoked-salmon canapé-eating jolly (whilst hob-knobbing with some of the literary stars of the moment) and readers get to listen to hour long amusing 'lecture' style talks about various authors' approaches and influences, after which, a polite queue forms to have their first edition hardback signed. It's all terribly lovely, and just to socially mix it up a bit, they now provide yurts for families to camp over in a nearby field - they come with a wood-burner and mini-fridge for the G&T. There's a lot of linen and wicker at these events. 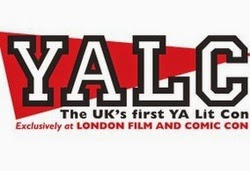 Trust me, there are no swag bags, sharpie doodles, t-shirts, and handmade offerings of love at these events. The very thought of a 'market style' convention in which authors and readers chat, hang out, have fun, exchange gifts is thought really rather "vulgar".

This is why the first reader, author convention I am attending is in the USA. That's right, I've had to book a stop off 12 hour flight and pay several thousand pounds to hang out with authors and readers that I have built up relationships with over the years - and I don't begrudge a penny of it. I am thrilled to be attending UtopYA

Just as I was thrilled to discover that at last, finally, the idea of a BOOK convention (not a literary festival - although being English, it has still failed to shake it's need to validate worth by being called the YALC (Young Adult LITERATURE convention) *rolls eyes* ) has taken root in England - and it looks awesome. It looks almost like the kind of reader, author cons that I yearn for from the States. The convention runs parallel to the London Comic-Con and ran for the first time last year; it was hailed such a success that it is running again this year.

It was implemented by the Children's Laureate, 'Malorie Blackman' in conjunction with Book Trust and sponsored by Waterstones book shop. (All heavy weights in the 'literary scene' ) The line up, being one of a kind on English soil, is phenomenal - I mean there are some YA author megastars coming, including a line up of hugely successful American authors, Cassandra Clare being amongst them. The line up also includes "TV personalities turned authors".

So the question is, how are they going to respond to the rise of the indie author? Is YALC going to make space for the home-grown indie who has shared Amazon bestseller space with some of the traditionally published YA authors? Well watch this space - I'll keep you posted.

All I can say, is that I'm going to put the champagne in the fridge in hopeful optimism. Either way, that part of the plan is going to work for me.

Find out more about he YALC here http://www.londonfilmandcomiccon.com/index.php/yalc