Dare You Visit The Haunted Village of Heargton? 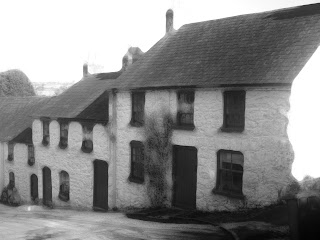 The sleepy, rural village of Heargton in the U.K has always been a magical place. Ever since the first bronze age settlers built their home and buried their dead in the ancient burial mound that lies West of the village.

Now the village, with just over 1,500 habitants continues to be a place of significant paranormal interest due to its positioning at the intersection of powerful ley lines. At the very intersection of the lines is the village well, which local legend has it is a portal to the underworld.

THE HEARGTON WITCHES and THE OCCULT
The Heargton well is also significant due to it's nefarious and continuous connections with witchcraft. In the 13th century the rafters of the well served as a makeshift gallows from which three young and beautiful sisters were hanged, accused of witchcraft, sorcery and the murder of several young women from the village.

Their cottage, up on the top of Heathmoor Hill, North to the village, still stands although it is now in ruins. The cottage has become the focus of many recent paranormal investigations, including the televised investigation conducted by Ghost Raiders, aired on HNC in 2013.

It is believed that there are several covens still active in the surrounding area. There is much evidence of Satanic and Pagan activity in the form of graffiti, livestock injuries and totems that can be seen hanging in several places around the village. The village continues to celebrate many ancient pagan rites, including that of the Lighting of The Fires, which takes place in the New Year, and which has become a unique tourist attraction, due to its pretty procession and festivities. 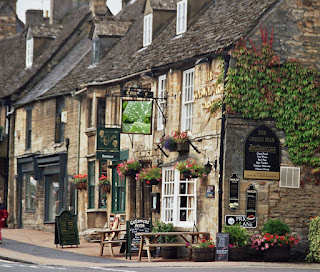 Over the course of the weekend investigation, Ghost Raiders also explored The Green Man Public House, a 13th century coach inn, still in use today and which has changed little in its 650 years. The Green Man prides itself on being 'one of the most haunted pubs in England'. Most dominant of its spirits being that of a large Tudor innkeeper who has not taken kindly to the subsequent owners, a Grey Lady who is believed to be a jilted lover abandoned mid-plan, and a friendly basset hound who still warms himself by the fire. As an interesting aside, The Green Man is also the original home of 'The Green Man Music Festival' which has become a cult festival drawing lovers of rock music from all over the country.

COLD STONE HOUSE and THE CHASE FAMILY
Heargton is home to two important historical houses. Cold Stone House, South of The Village is home to the Chase family; a branch of which is now located in New York, U.S.A in the form of the Pharmaceutical giants, Chase Enterprises. This branch of the family orginonated from one of the brothers who departed for the U.S.A in the earliest days, finding himself in Salem, Massachuttes and partaking in the infamous Salem Witch Trials. Cold Stone House is still home to Lady Penelope Asquithe; the remaining Chase of her bloodline. The family are notoriously secretive and have always been so. Little is known of them except that their family has been blighted by tragedy over the years; including deaths of all the male line in World War I, a tragic murder, suicide in the late nineteen forties of a woman and baby, and several other untimely ends.

RAVENHEART HALL and THE RAVENHEART FAMILY
To the North of the village is the imposing Gothic monstrosity of a country house called Ravenheart Hall, a suitable name. Built in red London brick during the Tudor period, it nestles, almost hidden between the ancient burial ground and Raven Woods. An incredibly rich and powerful family, with regal connections, the Ravenheart family were philanthropic with their wealth, building both the Heargton library and The Rookeries Hospital. However, despite these acts of generosity over the years, The Ravenhearts have not always been thought of kindly; there are several more nefarious figures in the Ravenheart lineage, including slave traders, tyrants, suicides and links to the occult. Descendants of The Ravenheart family continue to live there today.

RAVEN WOODS
Within the grounds of Ravenheart Hall are Raven Woods; a spooky forest predominantly formed of tall and shadowy Scott's Pines. The woods have long been associated with the paranormal. Believed to be ancient druid lands, it is believed that the woods are protected by an Elemental drawn forth from the Earth by early Druid Priests. The Raven Woods is now home to the abandoned and derelict Rookeries Hospital, originally built as a maternity hospital, it was refurbished after a terrible fire in which many women and babies died. When it re-opened, it was used as an 'asylum for the criminally insane and morally dissolute.' Many villagers claim to still heart the ghostly voices of the insane when the wind travels in a certain direction.

Raven Woods is also believed to be haunted by the spirits of three virgins, who are connected to the three standing stones which can be seen as you drive along the West Road, but be careful if you do drive that road, especially on a misty night, as you may come across the Headless Hunt, comprised of the hounds of Hell.

BOB TUSSOCK The Highway Man.
If you travel out of the village on the North Road, be sure that you're not driving a red car. Over the course of thirty years there have been over twenty fatal crashes and numerous accidents, all of which have involved red cars. Needless to say that there are very few owners of red cars in the village now. The cause of this improbable 'accident redspot' as locals call it is Bob Tussock, a Highway Man who now haunts the North Road after he was hanged from a post on the spot as brutal warning to other would be Highway Men. It is thought that he still seeks vengeance from the village for both his death and his humiliation.

As well as these paranormal hotspots there are stories of several other entities that have taken residence in the village. Many have seen a ghostly figure of a woman in Victorian black who frequents the churchyard of St.Ursula's Church (West of the Village). There is also local legend that there is a Woman of The Lake who lives in the lake within the grounds of Cold Stone House, and that the Cold Stone Woodlands are home to spirit children who many dog walkers have reported hearing laugh and play.

TRICK
I hope you have enjoyed learning a little more about the village of Heargton and its paranormal guests. This is where I have to admit dastardly Halloween Trickery and confess that Heargton is a village of my own creation.

If you fancy spending more time in the paranormal world of Heargton then 'Witchcraft', Book One of the epic occult and paranormal saga, 'The Meadowsweet Chronicles' is currently on Kindle sale for just 0.99 offer. You can also buy a copy in paperback either from Amazon or direct from me. Head to the website www.katiemjohn.com for details.

VISIT MY AUTHOR PAGE at AMAZON

NOW TIME FOR YOUR TREAT
The first twenty people who comments in the comment box on this post will be sent a signed Meadowsweet postcard and receive a beautiful handmade (by my own fair hands), Tibetan silver charm book mark, like one of these pictured. Leave a comment here and then head over to www.katiemjohn.com to send me your postal address. There's quick link on the HOME page.
﻿﻿﻿﻿
﻿ 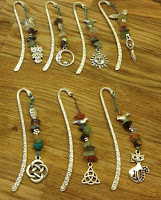 OCTOBER FRIGHTS BLOG HOP.
I hope you have enjoyed this 4th post in the #OctoberFrights Blog Hop. You can read more awesome posts by fellow horror and paranormal authors by either searching the hashtag on Twitter #Octoberfrights or by browsing through linked the blog roll below.

STAY IN TOUCH
If you have enjoyed your time on this blog, please press the join button in the right hand column.

HAVE A VERY HAPPY HALLOWEEN !