Who owns your life story? 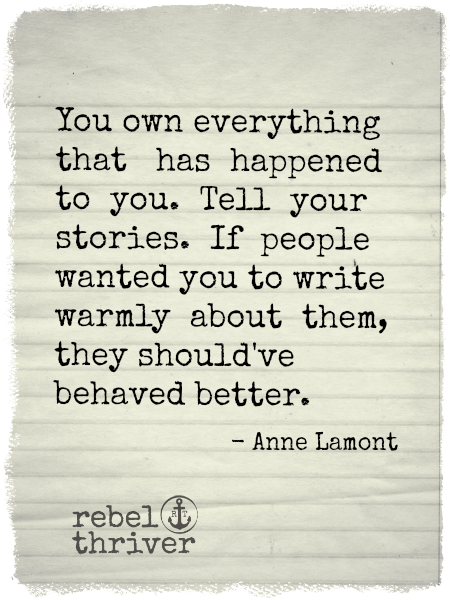 I've just had this meme flash up on my Facebook timeline and it got me thinking about something I have thought about a lot.

It's an interesting point, one for which I spent many MANY hours discussing as part of my Autobiography module on my MA Lit course; the idea that there is no absolute or fixed truth in personal history, just different perspectives, perceptions and responses to experiences, which all lead to a truth for each individual; which is still a truth even if we don't agree with it.

One of the reasons I have found this particular idea complex is because of my own personal history. At the age of thirteen my father suffered a full mental breakdown and the manifestation of serious bi-polar and personality disorders, which led to him being hospitalised on many occasions. Twenty years later he is better than he was, but he is still a very damaged and vulnerable man; and I guess on some level, all those who loved him are a little bit the same.

The meme suggests that those who might be badly portrayed should have behaved better, but so often other people's 'bad' or negative behaviour comes out of their own damage and suffering. Does this make them entirely responsible? I believe so but there are caveats. What about behaviours suffered due to addiction or abuse survival? What about behaviours conducted because of psychological illnesses? You see, it's a far more complicated issue than the meme suggests - as empowering as it is.

The experiences I lived, some of them truly horrific, at a formative time of my development, have of course influenced who I am both in my daily life and as an author. My own psychology clearly plays a part in my creative outputs.

For a long time, I didn't write anything 'public' about living with a parent with mental illness, not because I was ashamed, far from it, I believe we should all start talking about it more openly, but because although it was very much MY story, it was also the story that belonged to my father and my mother; as a result it has became the big elephant sitting on the writing desk.

How can something so significant to my own make-up be kept hidden? I've gone around in circles for years about my responsibility to share about my experiences in the hope that it might offer strength, inspiration, information and hope to other young people living with parents who don't quite fit the job description.

A few months back I wrote a short story for a Radio 4 completion titled 'Mad Dad', which was the first time I actually wrote autobiographically about this period in my life. Before submitting it, I spoke with my mother about her feelings on it. That conversation was too personal to share here, but the outcome was that I should go for it and submit it. It didn't get accepted, which I had prepared myself for as it was stated in the guidelines that they were looking for works that were lighter in their tone and I guess that mental health was a shade of darkness to far.

I have to say, that part of me is incredibly relieved. It would have been a big step to go so audibly public with such a personal story, and I'm not really sure how I would have felt hearing my world from the mouth of another. So 'Mad Dad' now sits in my trunk, waiting to be unpacked at another time in another place.

I know it isn't just me that has battled with this whole idea of life story ownership - there was a controversy over this idea of story and experience ownership in the novel, 'The Help', where those involved in the story believed that they had been exploited for financial gain; especially when the film rights were sold. Should everybody portrayed have received a cut of the money?

And on the other side of things, I guess it's interesting to think about how we might be represented if we were to be written into the autobiography of someone we knew - would we feel confident that they'd treat our behaviours, motivations and actions warmly?

Has anybody else struggled with this dilemma? I'd love to hear your stories and ideas.
Posted by katie M John at 03:18