A Fresh Brand New YA Vampire Series To Sink Your Teeth Into...

HE'S A NEWLY EMERGED VAMPIRE. SHE'S THE DESCENDANT OF THE MOST PREDATORY VAMPIRESS IN HISTORY...

When an eighteenth birthday party ends in bloodshed, Alexander Augustine’s secret is revealed. After his vampire identity goes viral on social media, there's no choice but to run, and there's only one place to go…

Bathory Academy, home to the next generation some of the world's most notorious vampire families, is a college like no other. It offers Alexander both sanctuary and a very different kind of education; a place where he can truly be.

As Alexander begins to slowly accept his supernatural life, and all the needs that go with it, he’s drawn towards the beautiful, but potentially deadly, Scarlett Bathory, soon discovering their history is as tightly knotted as their present.

With revolution, bloodlust, and desire for vampire world domination taking hold, Alexander starts to fear he’s nothing but a pawn in a very dangerous game.

To accompany the Bathory Academy series, there will also be a series of companion novellas, which can be read as a series in their own right or for a truly immersive reading exprience, alternated with the reading of Bathory Academy. 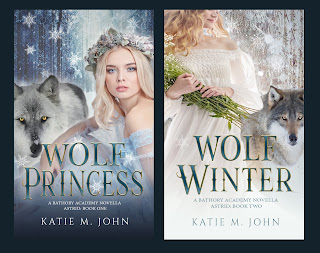 The launch schedule for Bathory Academy is: Sept, Nov, Jan, March, April and the companion novellas will be released in the alternate months.

THE COMPANION SERIES: 'THE WOLF PRINCESS'

ASTRID NORDSKOV: VIKING. VAMPIRESS. WOLF-PRINCESS. WARRIOR.
When there are so many elements to your identity, it’s hard to know who you really are, especially when everybody has a very clear idea of who they think you should be.

After being left for dead on the boundary of our settlement, having been attacked by Jeorge, the only boy I have ever loved, my father sent me, and my protective pack of wolfboys, to Scotland, to the safety of Bathory Academy, school for vampires.

But the gods have another path for me and so I’m ever connected to the land of ice and granite, to the forests and the sea.

*
In this companion novella series to Bathory Academy, Astrid Nordskov is forced to face the brutal reality behind her attack and comes to understand that the old gods have a very new vision for the princess of the last Viking clan.

With northern magic, Norse folklore, Vikings, shifters and vampires, The Wolf Princess series can be read as a series in its own right or alternated with the books of Bathory Academy for a fully immersive experience.
*
Readers’ Note: These are 20-25k thousand word novellas (Half-novels) and there is some more mature Young Adult content.