Review of American Horror Story: Season One, The Murder House

WARNING: THE FOLLOWING REVIEW IS FOR A SERIES WITH THE AGE CERTIFICATE OF 18. IT IS NOT SUITABLE FOR YOUNGER VIEWERS DUE TO SCENES OF INTENSE HORROR.

HOW DID I MISS THIS? 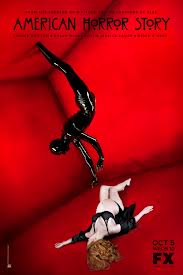 I'm not sure what happened or where I was but it must have been happening on a different planet. I've only heard one or two people talking about American Horror Story over here in England and so it had fallen off my radar. I also wasn't a Sky owner until late last year, so I missed the trailers. However, I kept seeing snippets of Season Two on adverts and I finally got around to downloading The Murder House series on Saturday. I finished watching it yesterday. Yep, that is in its own way, review enough.
Words like compulsive, maybe even a little addictive spring to mind.
I LOVED every moment of it. Every played and overworked trope, every in-joke reference, every nod to every seminal US horror film ever made.
This creation is so brilliantly constructed. And what I loved most about it all, was the incredible sense of playfulness that ran through it and stopped it all being a little too up its own jack.

I am a terrible viewer of horror. My ability to suspend disbelief is actually a curse. I know when I sign up to watch one of my fav genres, we are in for weeks of me nudging the hubby awake to check on every single bump in the night. So initially I only downloaded the pilot episode (Bear in mind I have yet to get past the first fifteen mins of Paranormal Activity) took a deep breath and half closed my eyes. Within ten minutes I was bewitched.

The characters are made of a great cast. Jessica Lange, playing the faded, twisted failed LA silver screen actress, Constance (with all her deep rooted Southern States ancestry and snobbery) was completely delicious. 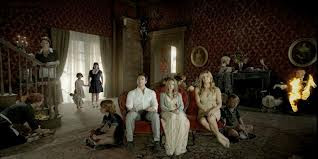 Dylan McDemott's representation of Ben Harman, the tired, flawed psychiatrist and the archetypal patriarch of the Fin de siècle  feminist horror stories (Yes, thank you for making the analogy of The Yellow Wallpaper so explicit) and Vivien (Connie Britton) as the wholesome, beautiful and wronged wife.

Of course there has to be a tortured angst adolescent, and Violet played by Taissa Farmiga manages to pull of the role rather endearingly (It could easily have been a torture all of its own)
The representation of Tate Harman was probably the most clever thing about the whole series. Representing the greatest horror figure of modern American times (Don't want to give too much away) Tate's character with his angelic golden curls and gentile, almost vulnerable humility twists the very nature of your own moral standpoint and creates a conflict in the watcher that sits most uncomfortably.

And of course there is the raft of other characters who all go on to make up the twisted, dark and murderous history of the house, fulfilling every horror and urban legend stereotype going however I won't - I leave that to your own enjoyment. However, I can't leave without saying how much I loved the nod to the classic Horror film, 'Rosemary's Baby' which has to be one of the very first horror films I watched and which has haunted me ever since.
NOTHING SHORT OF 5 STARS.
Posted by katie M John at 02:01