KDP SELECT - How to work it.

So for those of you who follow my journey, you'll be aware that almost a year ago (May 2012)  I wrote a post on 'Why Amazon KDP and I are on a break'

In that post I explored the reasons why KDP wasn't working for me. Well a year later, I've approached the whole KDP thing in a different way and hopefully the results will be quite interesting.

The biggest issue with KDP is the exclusivity clause; which is in my opinion is unnecessary and aggressively oppressive. It is certainly not something that the Big 6 are playing ball with, which led me to the question, 'How are the traditional publishers using KDP select to their advantage?'

There are 2 main ways.

1) They are releasing sample chapters in the guise of 'books' - offering the reader a few free samples with a link to purchase the full novel.

What they are NOT doing is signing up their main or whole novel up to KDP select and the exclusivity clause.


In order to do option 1, releasing sample chapters, they are having to 'publish' and register it as a separate work on Amazon. This does NOT involve having to register it with another ISBN or a catalogue at Neilsen, it simply means uploading it via Amazon KDP platform and having an AISN assigned to it.

Somehow this option doesn't quite sit right with me; yes, it's a clever way of directly targeting new readers by hitting the rankings in the FREE listings, but all they are really offering the reader is the same as the downloadable sample chapters which Kindle already provide. What it does achieve is the cluttering of the free rankings with samples of traditionally published novels that are already high up on the paid listings.

However, I have learned a lot from option 2 and have come up with the following plan.

FRONT COVER: Firstly, it is more important than ever to have a front cover that grabs the readers' attention when jumping into the free for all race, so I have had my front cover professionally designed with an image that is fresh, eye-catching and immediately communicates genre.


SHOWCASEEven though they are shorts, I have invested in having them Beta Read and edited professionally - they are going to be the potential portal to my other works for new readers, so the first impression needs to be good.


VIEW IT AS A PROMOTIONAL PACK: Secondly, I have thought about this 'giveaway' novella as a promotional pack. A teaser / gift pack for the reader. I ensured that there was plenty for the reader to enjoy so that they did not feel short changed. I included a personal note, a biography and YES, I INCLUDED CHAPTERS 1-4 OF MY NOVEL as a sample read at the end of the 'gift'.

CONNECTIONS WITH THE READER: The personal note explained how the short story, 'The Venus Club' led to the writing of 'Beautiful Freaks'. This then led onto sample chapters of 1-4 of the novel with a comment at the end saying TO READ THE REST OF BEAUTIFUL FREAKS FOR $0.99 CLICK HERE.

FOLLOW UP: I have ensured that the price of 'Beautiful Freaks' is reduced to $0.99 for a significant period after the promotion because I want to capture the reader once their curiosity has been hooked.

PREPARATION:
TIMING: The promotion is on at the same time as a major blog tour for 'Beautiful Freaks' a connected piece of work, which means that there is quite a lot of internet media coverage going on already, allowing me to piggy back off of it.

MEDIA PACKS & BLOGGERS / FRIEND'S SITES: I also created a media pack and let other writers and bloggers know that it was available, making it really easy for them to create a spotlight on their blog. This has allowed me to direct my twitter followers and facebook followers to the spotlights and links to the promotional giveaway without directly hitting them with 'spammy' links to the promo. (Although it is acceptable in my opinion to use some of these direct links and posts because after all, your followers need to be kept informed) 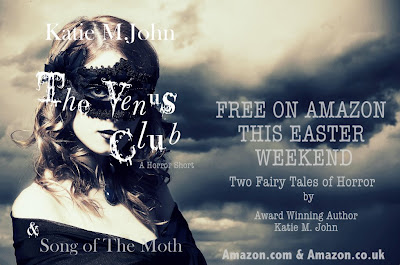 CALLING IN FAVOURS: If you have worked hard at becoming an integrated member of the indie writers' community, shouting out and supporting your fellow writers then every now and then it is okay to ask them for a favour. Our community is awesome and I've been really touched by the efforts and support some of my fellow authors have offered.

INVEST: Set a budget for the promotion function on Facebook and some coverage on Twitter. It doesn't have to be a fortune but it offers a little boost to getting your information posts out there.

WORK IT BABY: During the promotional period you have to be on it, checking your stats, tweeting your peeps and announcing the achievements you are making. It's about letting the world know you're showering them with gifts without harassing them.

Watch this space for my evaluation of this promotion. So far it is going really well. 'The Venus Club + Song of The Moth' (2 Fairy Tales of Horror) has made the top 100 in the Horror charts in both the U.K and the U.S and has been in the top 20 for Historical Fantasy in both the U.K and the U.S.A. It would be really nice to see if it can hit the hallowed #1 spot but we'll just have to wait and see.

AND ON THAT NOTE, YOU CAN PICK UP YOUR FREEBIE ON THE FOLLOWING LINKS UNTIL MONDAY MIDNIGHT GMT.