Why I've serialised a novel on Wattpad.

THE OUTCOME OF NANOWRIMO 2013:
Back in November of 2012 I undertook NaNoWriMo, one of the best things I have ever done. It taught me so much about the writing process, and also about my writer's mindset. For those of you who don't know about NaNoWriMo then it's basically an international challenge to pen a 50,000 word novel within one month. This is no easy undertaking, especially if, like me, you are the kind of writer that likes to take over a year to write a draft.
However there is something magical about NaNoWriMo and that is it cuts you free. You're forced free of your inner editor (there isn't the space or time for it), it allows you to type, at speed, an authentic flow of your thoughts, words and stories. You don't worry constantly about the reader's experience - you just get on and write the story that is buried in your heart; the one that under normal circumstances you'd never write because you'd be crippled by anxiety and a million questions.
The result of my NaNoWriMo is the short novel, 'When Sorrows Come', a very modern reworking of Shakespeare's Hamlet. 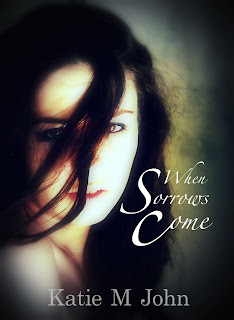 A New Adult (16+ contains more adult themes) story of insanity, love and coming of age. A very modern reworking of Shakespeare's Hamlet. When Malachi's mother marries his uncle, his whole world turns on an axis. Dark and disturbing suspicions plague his mind over his uncle's attentions to his fourteen year old sister, Maud, and before long Malachi begins a truly self destructive journey that jeopardises everything he loves.
Like a light in a storm, Ophelia offers Malachi his only chance of salvation, but she has her own issues to deal with. With her bi-polar mother, Maud in and out of psychiatric hospital, Ophelia's love for Malachi threatens the very last semblance of her own sanity. The dark and dangerous chemistry that pulls Malachi and Ophelia unhealthily together in a twisted survivalist bond, is sure to lead to only one end; a tragedy - that is unless, Ophelia can find the strength to accept the light that comes with a true and pure love. The question is, will Ophelia submit to the darkness or take her only chance to escape from the one she desires above life itself?

By the time I got to the end of November, not only did I have a novel in the trunk, but I had a novel that I really loved. However, I was in a dilemma. Because I had written it under such speed, the novel was (in my mind) completely unpublishable without months and months of editorial work. And with a new project of a seven book series (The Meadowsweet Chronicles) looming, I really couldn't foresee how this could be achieved. I was initially happy to shelve it for a while (It was going to be a long while) but then I read Chapter One and I discovered that far from needing the months of close editing I imagined, there was freshness to the work that gave it a certain energy, perfectly fitting for the story.
In the end I decided to take the plunge and treat the whole novel as an experiment, (much like Aldous Huxley used to do in his automatic writing exercises) and publish it with the minimum amount of work done on it. By this I mean all that has been done is a spell check and a check for consistency in details and plot but as far as structure and language go, it remains in it's purest form.
I have not done these checks all at once, because I knew that as soon as I opened the document to start fiddling with it, my inner geek would not allow me to leave it alone, so I have been proofing it one chapter at a time before uploading it on to Wattpad.

WATTPAD:
I'm still fairly new to Wattpad and in truth I'm still not entirely sure how it works, however I thought it was a great platform for serialising the novel and I love the fact that readers can comment and vote in direct response to a part / chapter that has been posted. In this way I hope to get some good critical feedback that I can store away for a future date when I 'properly' publish 'When Sorrows Come.' So far 'When Sorrows Come' has had over 380 hits, which is really encouraging.

ISSUES WITH DEFINING:
Because I wrote this novel straight from the heart without a conscious application of genre, trope, audience and 'purpose', it has been hard to try and define this novel. This was particularly highlighted when I tried to categorise it on Wattpad. It didn't really fit into Young Adult fiction which goes as low as thirteen (there is drinking, drugs, sex and swearing) and yet it seems a little harsh to classify it as 'restricted', because the sex is not erotica or hard core 18+ porn although it is unconventional and 'unhealthy', the swearing is the 'norm' for most 15+ year olds, the drinking (which is seen as much more taboo in U.S Young Adult Fiction than it is in U.K) is 'just' part of the teenage experience and the drug use explores the abuse of 'legal' highs rather than illegal drug taking.
As a result, I've batted safely and put it under the 'R' category with a warning that it is suitable for 16+ because we come back to that old dilemma of Young Adult writers being slammed for representing the authentic experience of adolescence when really most of society wants to think we are still in the world of Anne of Green Gables. (Ooh, feel another post coming on.)
Ideally, Wattpad would have had a NEW ADULT category, which is an increasingly used category for authors and stories with exactly the dilemmas I have outlined.