Beware the Ghostly Hunt. Don't go into the woods alone...

The Meadowsweet Chronicles is a seven book series that plays with a whole host of folklore, countrylore and urban legends. Heargton  Village sits at the intersection of lay-lines and has long been known for its magical properties. The activities of the Ravenheart coven have caused a paranormal ripple effect, unleashing a whole cast of paranormal beings.

One of the paranormal phenomenons that manifests is that of a wild hunt or a ghostly hunt, which rides through Raven Woods.


There are many versions of this legend which also encompass The Headless Huntsman that span several continents - most famous of these is 'The Legend of Sleepy Hollow' which was immortalised by Irving and then later film and T.V adaptations. Irving had travelled extensively through Europe and had picked up the legend along the way.

The headless huntsman or the ghostly hunt have many variants across Europe. In Celtic mythology, it is told of a headless fairy who rides with its head tucked under its arm, and which has a whip made of a human spine.

In Germany the tale talks of a ghostly huntsman with variant tellings of him with or without his head.

This legend of the ghostly huntsman is also known as The Wild Hunt, and legend talks of a huntsman, or several huntsmen riding through the woods in the company of a pack of dogs that are reputed to come from Hell. The first documentation of the Wild Hunt was written by German folklorist, Jacob Grimm (published in 1835 Deutsche Mythologie)

In certain parts of Britain, it is believed that the hounds from hell are out to chase sinners who have not been baptised. In Devon they are referred to as the 'Wisht Hounds' and in Cornwall 'The Devil and his Dandy Dogs', in Wales, 'The Cwn Annwn / the Hounds of Hell' and in Somerset 'Gabriel Ratchets dogs.

In the meadowsweet Chronicles, Fox and Jeremiah hear the sound of ghostly dogs barking before sensing the terrible feeling of being chased. They flee, knowing that behind them, a terrible force of darkness is pursuing them.

Fox sees the lead huntsman and recalls how he wore the rags of a frock coat which flew back to expose his skeletal body, which still had rags of decaying flesh hanging from the bones. His eyes glowed red and she was certain that the dogs that accompanied him were from the very flames of Hell.

You can read the story of The Meadowsweet Sisters and all the other various folklores in the series here. To celebrate the release of Book 3 of the series, 'Devilry', I have put Book 1 of the series, 'Witchcraft' on FREE DOWNLOAD on all eBook platforms. 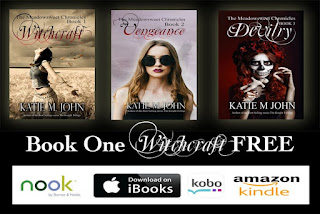