When you have a book whoops...

Exciting news! Although entirely unplanned on the schedule (the best things in life often are) - I'm having an unexpected book baby!

Last week, I had this real compulsion to return to the world that started all this crazy book business; the Arthurian Realm. It had been a long thought idea that one day I would write a series of companion novellas to the Knight Trilogy, exploring the various secondary characters -- however, I hadn't actually planned on doing it within the next couple of years. 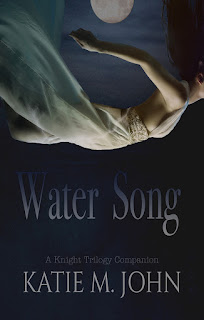 and it happened really quickly. Already, the first 10,000 words are written. It's been a crazy writing week, and I haven't written at this pace or with this amount of passion since the writing of 'When Sorrows Come' three years ago. As you know, I'm a pretty slow writer, usually getting one or two (at a push) titles out a year. But this story... the story of The Ladies of The Lake, is literally writing itself.

I prepared for the writing of The Knight Trilogy by doing a stack of research - and by that I mean I read literally hundreds of books, filled in countless notebooks, and studied the works of the various vulgate cycles. It became a totally all consuming passion, and Mallory's Morte D'Arthur is almost engrained in my soul.

And I guess that this is the consequence of that; despite it being almost five years since I put the pen down on the last of the trilogy, it's still there in my heart - the characters didn't die for me, but were merely sleeping, in that way they have a tendency to do in The Knight Trilogy.

Water Song tells the back story of Vivien of the Lake and her Water Fae sister Nimue. It is a time period piece, taking the reader right back to the very early years of Arthur's rise to the throne and the establishment of Camelot -- but it's also a chance to play with some of the ideas that come to fruit in the contemporary world of 'The Knight Trilogy'.

There are so many different versions of the Arthurian legends, so many various interpretations, translations that it's like a ball of string with many ends - and that's what is so delicious to work with; although the legends all have their agreed fundamentals, there are so many variations to play around with - and this is particularly the case with the Lady / Ladies of the Lake, who seem almost amorphous; taking on multiple personalities, manifestations, names and roles depending on which version you refer to.

In Water Song, I have opted for the idea of their being two principle Ladies of the Lake who directly impact on Arthur and Camelot, Vivien and Nimue, who in my version, are water-fae born on the same night.

Here is the opening to 'Water Song' - you read it here first ;)


On the night we were born, the lake rocked violently with wind whipped waves, which over-lapped the reed beds and chewed away at the clay earth. It was a storm not seen in lifetimes, as if the whole of nature was forcing our pink wiggling bodies out into the water-world in one howling scream of labour.

So, when can you get your hands on this novella? It's coming out in January 2017, once it's finished and been checked over by my editor - and it's going to be completely free; the only catch is that if you want to read it in 2017 (before it goes on general release in 2018) then you need to be a subscriber to my newsletter --- I know, I know... but I promise you, I don't spam and I always fill my  (short) bi-monthly newsletter with lots of goodies from both me and my author buddies, making it well worth your while to sign up.

I really appreciate folks taking the time to open up the newsletter and take an interest so it's very much a place I shower you with love and appreciation - hence this novelette is a newsletter exclusive for a whole year before general release.

You can sign up here for this month's newsletter, which has a free christmas gift from me, and the new feature 'The Three Free Book Roll' - which contains links to 3 free quality ebook reads from me and my buddies. As well as that there is an exclusive subscribers' giveaway in which you can get your hands on a signed copy of 'When Sorrows Come.'

If you haven't yet stepped into the magic of The Realm, Book 1 of the series, 'The Forest of Adventures'  is on Free Download at Amazon and iBooks. You can pick up the free download links on the landing page of my website www.katiemjohn.com 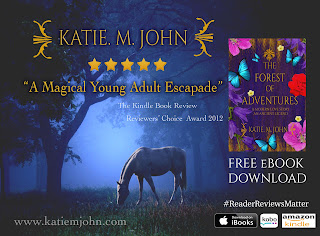