What if the Legend Never Died? 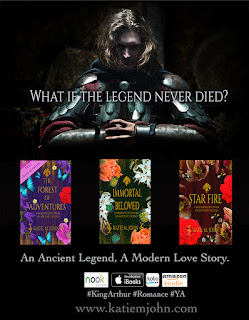 A little bit about my series, The Knight Trilogy. Published in 2011, this is the first series I wrote and it was a labour of love and years of dedicated research into the Arthurian legends of both England and France, of the Golden Thread theory, of all the Holy Grail and bloodline theories and studies, of The Knights Templar and of European folklore - I grew up with an obsession for all things Arthurian, and all the different versions there have been throughout the centuries, and interpretations there have been in various art forms.

My YA series explores the idea that the Arthurian Realm still exists, just beyond the forest; and that King Arthur's knights still play a part in 21st century English political life. It's written in the form of YA Paranormal Romance, but behind that, it's a dedicated reworking and exploration of the Arthurian legends.

I have spent many summer camping vacations in the Forest of Broceliande in France as part of researching the mythology - and dragging my kids and hubby around all the various 'sites'; the tomb of Merlin, the Knight Templar chapel, Vivien's lake, the fountain of eternal Youth - it never fails to fill me with magic and inspiration.

The book is essentially a love story - but it also deals with issues about friendship, loyalty, being individual, daring to do right, and making sacrifices. Mina Singer is seventeen years old and attending college in Cornwall. When the mysterious Blake Beldevier arrives, he catapults her into a world she only thought existed in fairy tales.

However, like all good fairytales, there is a wicked witch - and Morgan Le Fay is the wickedest witch of all.

It is essentially a coming of age story, a story of true love and emerging responsibilities. Book 1 of the series if FREE on all ebook sites. You can learn more about this series and my other works over at my official website www.katiemjohn.com
Posted by katie M John at 04:59